My Quest to Check Off Golf's Best Experiences

FAQ's about me and my quest:

So far, all of them!  Eventually, I might have to narrow it down to one particular list, but for the time being, I think it's fun to chip away from as many lists as I can.  Of course, the lists are frequently changing with courses coming off and new courses being built and added.  This is what makes this such a tough challenge.  However, for the time being, I'm not close enough to the end of the line where making a decision between Golf Magazine, Golf Digest, or others really matters.  In addition, you'll see by this website that I pay attention to the Top 100 public lists too.  This is where I can control my own destiny since I don't need invitations to private clubs.  So, when I can't get on private courses in a particular part of the country yet, I may as well check off another relevant course, and that's what I've done so far.

When did you start this quest?

I started playing golf when I was about 10, but I didn't play my first Top 100 course until 1996.  However, I really didn't state my bucket list goals until 2011.  I had already checked off a few courses from the lists and played in a number of states, but this was when i started getting serious about the quest.

What counts as playing in a State?

It needs to be an 18 hole round on a fully length course.  No 9-hole rounds and no par 3 courses.  Otherwise, there are no requirements.  Some are Top 100 courses, some sure aren't!

What's next on the agenda?

I'm working on building out the 2016 calendar, but there are some biggies that look like they'll be checked off in late June.  The trip will include several classic courses on the East Coast.  Stay tuned!

How many golf courses have you played in your life?

Any Holes in One?

What's in your bag?

Where do you usually play?

Some at home, some on the road.  Rarely very close to my hose.  I have a membership at a private club on the Top 100 list.  If you've read the reviews, you know what it is.  If you haven't gotten to that page, just ask me.  I'm happy to offer up a round there in return for an invite to another Top 100 course.  Just contact me.

How good are you?

I guess I'm a decent amateur player.  My handicap usually varies between about 6 and 8.   I probably shoot in the 70's about a half-dozen times per year and probably about the same for the 90's.  The rest of the rounds are steadily in the 80's somewhere.

What's your best round ever?

How many rounds do you play a year?

Recently, it's been between 60-75 rounds per year, which isn't all that bad for living in Michigan.

How can I reach you?

So, who am I, and what is this page all about?

My name is Matt, and I have a Golf Bucket List.  The list includes golf-related goals that I want to reach during my life, and it's a long one.  To summarize: 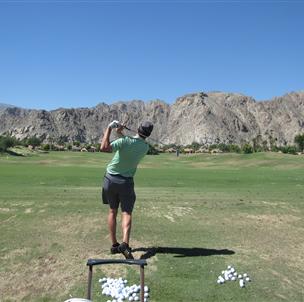